The Give a Little Blog

Wendy Smith is now blogging at The Give a Little Blog!

We've moved our commentary on giving to a new page called The Give a Little Blog. Here I'll be debunking myths and revealing the truth about who gives, what matters, and what works. We're spreading the word about the magnitude and power of giving by everyday philanthropists and changing outdated perceptions about charity.
Join us!
Posted by Wendy Smith

With open hearts and open hands,we gave what we could,and a little became a lot.

This first sentence of "Give a Little: How Your Small Donations Can Transform Our World" refers to the outpouring of charitable giving by Americans following the 2004 Indian Ocean tsunami.

American households gave $2.78 BILLION for rescue/relief/rebuilding in the months following the tsunami. This accounted for nearly HALF OF ALL GIVING by all governments, corporations, foundations and other bodies around the world. The median donation was $50; the average donation was $135.

We everyday citizens are the great philanthropists of our time! Following the tsunami, donations by wealthy celebrities and corporations made headlines. They are again in the wake of the earthquake in Haiti, but the overwhelming wave of giving coming in small gifts via text messages and compounded by messaging via twitter, facebook and bloggers has demanded the media attention it deserves.

With real-time images that are nearly unfathomable coming at us from our television screens, the magnitude and devastation from the earthquake in Haiti is so painful that many of us are compelled to share our mourning and misery where we can - on the internet.

Here's to social networking and innate generosity of everyday citizens.

Congratulations on another incredible wave of good will toward our brothers and sisters in Haiti.
Posted by Wendy Smith

Speak Out for Better Disaster Response!

The next disaster could be in YOUR community!
Everday citizens can help prevent another painfully slow rescue/relief rollouts like the one we are witnessing in Haiti or the aftermath of Hurricane Katrina.

Talk to your community leaders, then to state legislators, US representative and senators, then the United Nations! T
Tell them you expect a PLAN that can be shared with everyday citizens! Ask questions, speak up, speak OUT!
Posted by Wendy Smith

So good to hear about the amazing generosity of donors and the influx of supplies and personnel to Haiti. Yet I am frustrated by the slow and chaotic distribution to the field. I know there are tremendous barriers due to the destruction and the lask of functional civic institutions and infrastructure in Haiti.

Still, for the future, I'd like to see the world's nations create a crisis response plan for these high-destruction, high-casualty crises that is nimble, quick and has machinery/personel that can transcend these obstacles - ie, more helicopters that can be quickly transported anywhere the world; personnel that can be helicoptered in and are equipped to manage crowds at distribution points, etc.

As for rescue equipment, that is more difficult. Still, good brains can imagine and create machinery that can be transported by helicopter in pieces and assembled on location, or those that can actually maneuver across earthquake-devastated terrain.

Give a Little is a BOOK and a MOVEMENT aimed at empowering everyday donors to help eradicate extreme poverty thru their affordable donations.
Join us in spreading the word and learning about great opportunities to make a difference!
http://www.facebook.com/pages/Give-a-Little/175362537797

The Truth about Overhead

"Overhead" expenses are a segment of the overall costs of conducting a nonprofit organization's mission. These include the costs of office machinery, rent, the administrative assistant's salary, utilities, office supplies, etc.

The general rule of thumb has been that the lower an organization’s overhead, the better; the logic being that this means the agency directs more of its income toward conducting its programs.

This single piece of data has informed many donors including individuals, foundations, corporations, and government bodies and has created tremendous pressure on nonprofit agencies to keep these costs low. It turns out, however, to be a red herring.

Together, the Center on Philanthropy at Indiana University and the Center on Nonprofits and Philanthropy at the Urban Institute conducted the Nonprofit Overhead Cost Study, which examined the true meaning and role of overhead costs to a nonprofit’s ability to effectively carry out its mission. Its findings rejected the long-held notion that the best nonprofits had the lowest overhead costs. The following is an excerpt from the report “Donating to Charity: a Guide.”[i]

…the overemphasis on low overhead, far from enhancing the efficiency of charitable organizations, has reduced their effectiveness and corrupted their accounting. Let’s talk about effectiveness first. Overhead pays for the organizational infrastructure that supports a program. It’s the rent, electricity, heat, telephone, and furnishings. It’s the management and board. It’s accounting, human resources, and information technology. It’s the website you visited, the annual report you read, and the time of the people who talked to you when you called.

Overhead isn’t waste; it’s the basis for mission effectiveness. The Nonprofit Overhead Cost Project found wide variation in the adequacy of organizational infrastructure. Some charities included in the study had nice facilities, the latest computers and software, and highly experienced and sufficient staffing in supporting functions, such as accounting, information technology, and fundraising. At other charities, rain came through the roof, computers were mismatched hand-me-downs, software was makedo, and key support staff had limited training or experience for their roles, or were part-time because this was all the organization could afford.

These limitations had consequences for the effectiveness of these organizations. The mismatched computers frequently crashed and were expensive to maintain. Weak financial staff and software meant charities didn’t really know where the money was going, and financial controls were often inadequate as well. Poor software meant charities didn’t have good information about what they were accomplishing that they could share with donors and other supporters, or wasted money on fundraising that wasn’t properly targeted. None of the organizations in this study was an extravagant spender on overhead items, and while there are undoubtedly some charities that are, by far the more common problem is spending too little on the organizational infrastructure that is the foundation for effective programs over the long term. Lower is not better—better is better. And by and large, you get what you pay for. (bold added by author)

As donors, we don’t want a large portion of our gifts being spent to raise the next ones. We expect nonprofits to fundraise efficiently. Charity Navigator measures fundraising efficiency by the ratio of fundraising expenses to the total contributions received by the agency. This determines how much the agency spent to raise each donated dollar.

We let business advertise until the last dollar no longer produces a penny of value, but we don’t want charitable donations spent on advertising. So charities can’t build demand for causes. Budweiser’s all over the Super Bowl. AIDS and Darfur? Absent.

Amazon could forego investor returns for six years to build market dominance. But if a charity embarks on a long-term plan with no return for six years – we expect a crucifixion. Business can offer profits to attract investment capital. But there’s no stock market for charity. So the for-profit sector monopolizes the multi-trillion-dollar capital markets. No competitive compensation, no advertising, no risk-taking, no long-term vision and no capital markets. A perfect storm of prohibition that puts the nonprofit sector at extreme disadvantage to the for-profit sector. We blame capitalism for the inequities of society and then refuse to let charity use the tools of capitalism to rectify them.

Maybe capitalism isn’t the problem. Maybe the lack of it is. It’s been banished from charity by a Puritan ethic of deprivation that considers it contaminating. Maybe an ethic that stands in the way of progress is an ethic whose time is done.[i]

[i]. The Center on Philanthropy at Indiana University, National Center for Charitable Statistics and the Urban Institute, “Donating to Charity: a Guide,” (2004), http://nccsdataweb.urban.org/kbfiles/541/Donor%20Guide.pdf

Posted by Wendy Smith No comments:

Asthma Vans Keep Kids in School and Parents at Work 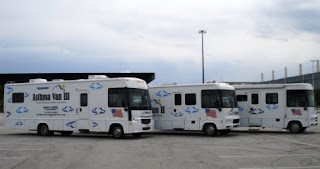 www.mobilecarefoundation.org
Last week, I walked into a Mobile C.A.R.E. asthma van and watched a young man - a composed, friendly and successful high school freshman - undergo an asthma check-up. His father had accompanied him to the van, which was parked in the school lot where his son had attended elementary school and his two younger daughters continue.
The father spoke to the Mobile C.A.R.E. nurse in Spanish - chatting about his son's successful transition to a magnet high school and updating her on his 3rd and 4th grade daughters' health. They would be seen on the asthma van another day. His son's asthma has long been well managed; fortunately, he'd been treated by the asthma van since he was 7 years old. He'd missed few days of school due to his asthma, and he'd achieved his academic potential.
You may believe, as I once did, that asthma today is primarily a nuisance - a chronic, but easily managed condition. That may be true for those of us with excellent health care coverage, access to health care that doesn't require hours of waiting, and money to spend on prescription medications.
A few enlightening facts:
Asthma is epidemic in urban areas in the U.S.
It is the #1 cause of school absenteeism.
In 2003, children with asthma missed 12.8 million days of school.
Right there - that last statistic alone - is a bright red flag for school failure and the host of poor outcomes that follow including low levels of employment, early parenting, depression, delinquency.
Parents of children with unmanaged asthma miss precious, mostly unpaid days of work. Families slide into economic insecurity and even poverty.
Mobile C.A.R.E. brings comprehensive asthma treatment to high-risk children in public and private schools and head start programs in Chicago's under-served neighborhoods.
Mobile C.A.R.E. gets kids' asthma under control - they go to school - their parents go to work. Families prosper.
Mobile C.A.R.E. IS CHANGING LIVES IN CHICAGO. They want to serve more children and families in surrounding areas. Your affordable donation will change a child's and family's prospects for a better future.
Give a Little today! www.mobilecarefoundation.org
Posted by Wendy Smith